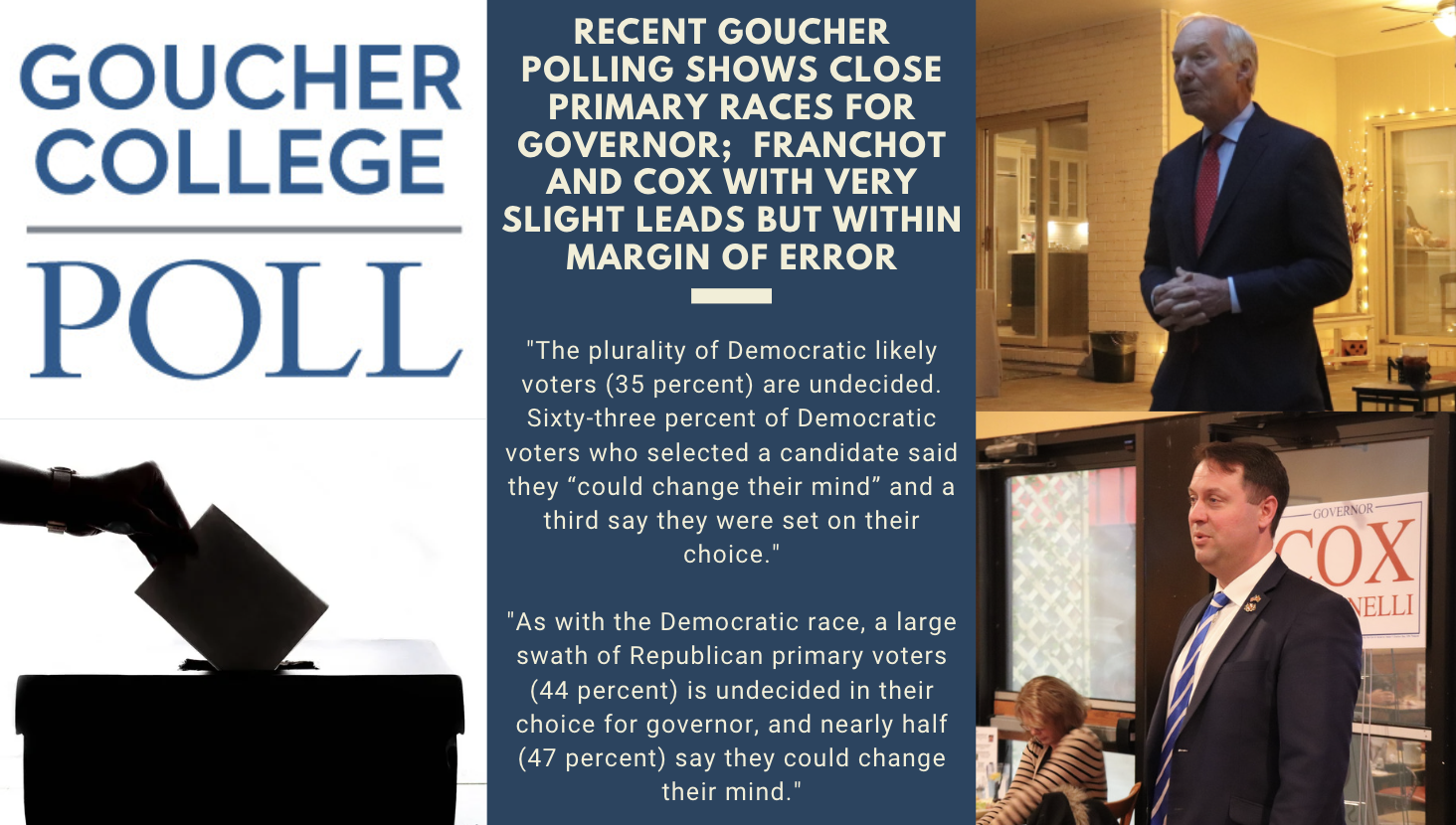 Top candidates in the Democratic Primary:

Top candidates in the Republican Primary:

While Franchot and Cox came out on top of the polling there is the “4.4 percent” margin of sampling error so these races remain super close at this point.

Also of significant note – there is a large number of undecided voters per the polling in both Primaries (35% in the Democratic Primary and 44% in the Republican Primary) and the races are very much wide open for many candidates at this point.

These races are likely to be decided by voter turnout…and with a July 19th date…who knows what that will look like next month.

Here is the information from the press release from Goucher College Poll:

The Goucher College Poll was conducted from June 15 to 19, 2022. It surveyed 501 Maryland Democratic and 508 Maryland Republican voters and has a margin of sampling error of +/-4.4 percent. Voters were asked their opinions on the direction of the state, economic conditions, political figures and entities, key policy issues, the state of American democracy, elections, and the storming of the U.S. Capitol on January 6, 2021. Republican voters were asked about former President Donald J. Trump and the future of the GOP as well as their opinions on Gov. Larry Hogan’s rumored presidential run. Additionally, 403 Democratic and 414 Republican voters were identified as likely voters and asked for their candidate preferences in the upcoming statewide gubernatorial primary contests. The samples of 403 Democratic and 414 Republican likely voters has a margin of sampling error of +/-4.9 and 4.8 percent, respectively.The poll was funded and co-sponsored by the Sarah T. Hughes Center for Politics at Goucher College, The Baltimore Banner, and WYPR.Download the complete results, including methodology and question design. To view archived polls, please visit www.goucher.edu/poll.

The second part of this poll will be released on Wednesday, June 29, at 5 a.m.

The race for the Democratic nomination for governor is competitive and fluid. In a large field of nine candidates, Peter Franchot, Wes Moore, and Tom Perez are in a three-way tie and the only candidates to earn double-digit support.

The plurality of Democratic likely voters (35 percent) are undecided. Sixty-three percent of Democratic voters who selected a candidate said they “could change their mind” and a third say they were set on their choice.

“Our poll was conducted one month out from the primary election,” says Mileah Kromer, director of the Sarah T. Hughes Center for Politics at Goucher College. “The three frontrunners—Franchot, Moore, and Perez—each have the campaign funds and endorsements to compete for the voters of a largely undecided and malleable Democratic primary electorate. Still, even with the investments of their significant resources, it’s unclear how much attention the average voter will pay to the mid-July primary.”

As with the Democratic race, a large swath of Republican primary voters (44 percent) is undecided in their choice for governor, and nearly half (47 percent) say they could change their mind. If the primary election for Maryland governor were held today, 25 percent say they will vote for Dan Cox and 22 percent for Kelly Schulz.

Democratic voters were informed that Dan Cox was endorsed by former President Donald Trump and Kelly Schulz was endorsed by Gov. Larry Hogan in the Republican primary and asked whether they’d consider voting for Cox or Schulz in the general election.

“Given the political demographics of the state, Republican candidates must earn around a quarter of Democratic votes to win statewide office,” says Kromer. “Our polling suggests that the Republican primary race is competitive between Cox and Schulz, but that Schulz is in the best position to be competitive against the Democratic nominee in the general election.”

Maryland Republican and Democratic voters see the 2020 general election and the storming of the U.S. Capitol on January 6, 2021, very differently.

Nearly all Democratic voters (89 percent) say that President Joe Biden won the 2020 presidential election “fair and square,” whereas 26 percent of Republicans think the same. Fifty-seven percent of Republican voters believe that Biden “won due to fraud.” There is no evidence that widespread voter fraud occurred during the 2020 election.

A majority of Republicans (57 percent) and 88 percent of Democrats say they are “somewhat” or “very” confident that the 2022 elections in Maryland will be conducted fairly and accurately.

Republicans (81 percent) and Democrats (77 percent) both see democracy and the rule of law in the U.S. today as threatened rather than secure.

Direction of the State and Economic Situation

Republican voters express more negative views than Democratic voters toward the direction of the state and the current and future economic situation in Maryland. Republicans are also more likely than Democrats to indicate that recent price increases have caused themselves or their household “major” financial hardships.

Voters were asked whether various statewide issues were a major, a minor, or not a concern to them.

Attitudes Toward Abortion and Gun Control

Most Democratic and Republican voters want to keep access to abortion legal, though they are divided on whether that means legal in all or only under certain circumstances. The poll was conducted before the U.S. Supreme Court overturned Roe v. Wade.

Democratic and Republican voters held different attitudes toward Maryland’s current gun laws. Nearly three-quarters of Democrats, compared to 28 percentof Republicans, think that state laws covering the sale of firearms in Maryland should be made stricter. Majorities of Democrats (55 percent) and Republicans (53 percent) say they “consider a candidate’s position on gun control as one of many important factors” when deciding how to vote.

Ratings of Politicians and Political Parties

The Future of the GOP and Gov. Larry Hogan

Republicans are evenly divided over where former President Donald Trump fits in the future of the GOP. Forty-eight percent think “the Republican Party should continue to be led by former President Donald Trump,” and 48 percent think either “Trump was a good president, but it’s time for new leadership” (35 percent), or “Trump was a bad president and it’s time to move on” (13 percent).

About the Goucher College Poll

The Goucher College Poll is conducted under the auspices of the Sarah T. Hughes Center for Politics at Goucher College. The center is directed by Dr. Mileah Kromer, associate professor of political science. Founded in 2012, the Goucher College Poll seeks to improve public discourse in Maryland by providing neutral, unbiased, and independent information on resident opinions. The Sarah T. Hughes Center for Politics is a member of the Association of Academic Survey Research Organizations and the American Association for Public Opinion Research Transparency Initiative. For more information or to view archived polls, please visit www.goucher.edu/poll.