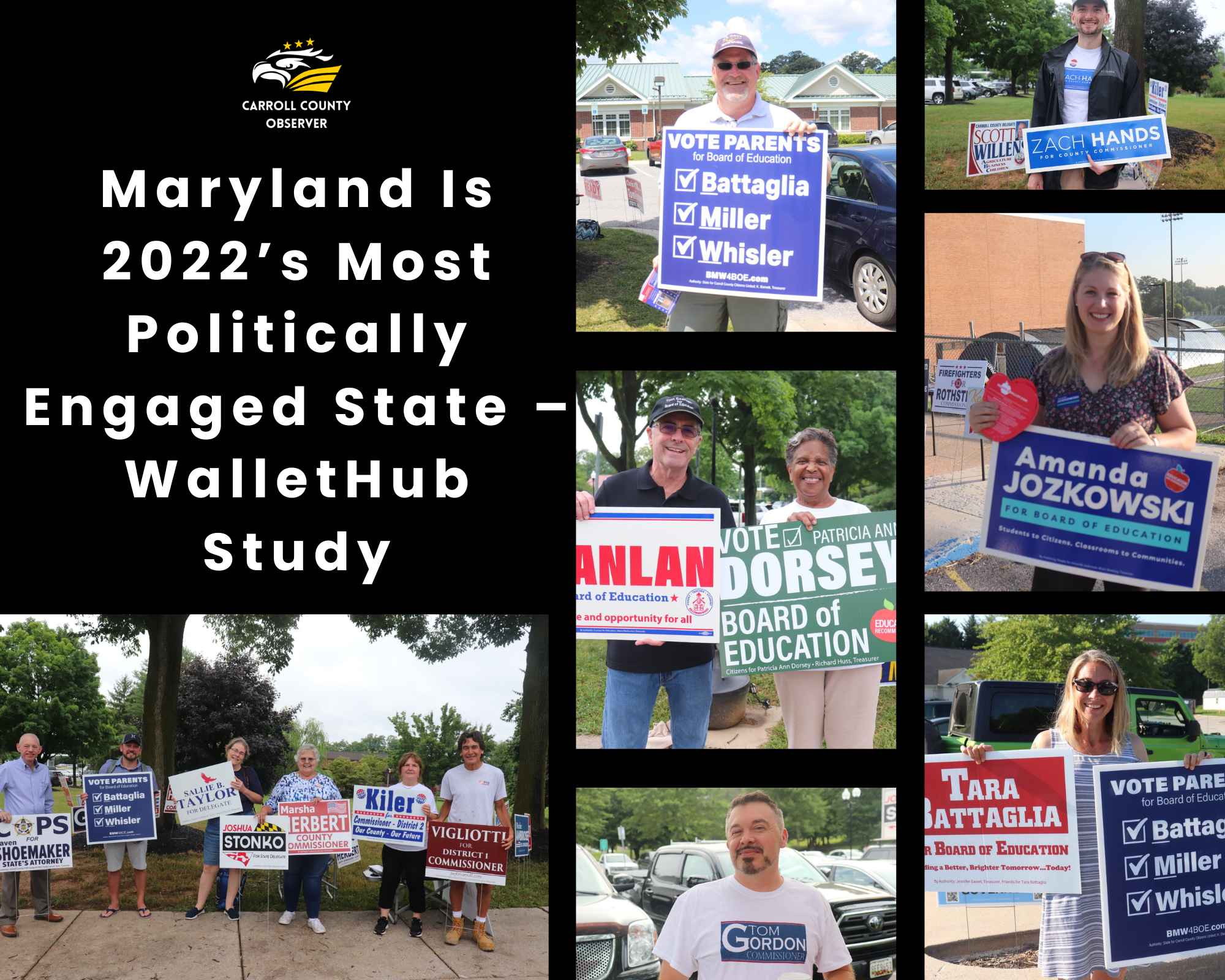 With Election Day coming up and only 66.8% of the voting age population having voted in the 2020 presidential election and 53.4% in the 2018 midterm, the personal-finance website WalletHub today released its report on 2022’s Most & Least Politically Engaged States, as well as accompanying videos and expert commentary.

In order to determine where Americans are most involved in politics, WalletHub compared the 50 states based on 10 key indicators of political engagement. They range from the percentage of registered voters in the 2020 presidential election to total political contributions per adult population.

Political Engagement in Maryland (1=Most; 25=Avg.):

The Top 10 states include:

What states do you think will have a particularly high turnout this election year?

“Turnout is a function of four things – political culture, socioeconomic factors (education, income, etc.), the ease of voting, and mobilization. The states that usually have high turnout – wealthier and better-educated states such as Massachusetts, Connecticut, Minnesota, or Colorado – will continue to have high turnout. Some states with competitive statewide races – places like Georgia or Pennsylvania – may also be places where one or both parties are successful in getting voters to turn out. Few of the states with competitive statewide races are places where turnout usually tends to be high, but if I had to choose, I would pick New Hampshire or Colorado as places where more than one of these factors is present.”
Robert G. Boatright – Professor, Clark University

“States where there are close elections can expect higher turnout and they will be more politically engaged than others. States that have safe elections for one party or the other will still have higher turnout than in the past, but comparatively speaking, the swing states will be more engaged and have higher turnout in November 2022. In terms of turnout, I predict the top five states will be Florida, Wisconsin, Arizona, Kansas, and Nevada. Secondarily, Georgia, North Carolina, Pennsylvania, and Ohio. The others will line up behind those.”
William Eric Davis – Professor, College of Southern Nevada

Why are some states more politically engaged than others?

“In looking at states with consistently high voter turnout, including Alaska, Maine, and Vermont, it is clear that retail politics can help promote political engagement. In states with just one or two congressional districts, a candidate running for a congressional seat or statewide office will be expected to engage with constituents on the campaign trail, in town-hall formats, or in debates. Vibrant press coverage, with candidates and elected officials providing interviews to statewide and local print or broadcast media, in addition to the candidates maintaining an active social media presence, provides a number of different outlets for voters to learn about candidates and issues. Challengers and incumbents alike understand the role of the local press in particular, both in getting out a message and in connecting constituents to their government.”
Janet M. Martin, Ph.D. – Professor, Bowdoin College

“Several reasons. We know from quantitative work that education and income correlate highly with voter turnout. So, states, where a greater proportion of people have college degrees and higher incomes (i.e., Massachusetts, Minnesota, etc.), will tend to have higher voter turnout rates. The ease of voting also helps. States where voting by mail is possible and where someone can register to vote close to election time will have fewer barriers in the way for people to vote, which should cause turnout rates to rise.”
Alison Johnston – Associate Professor, Oregon State University

What are effective local strategies for increasing political engagement?

“Unfortunately, threat or fear is a major motivator for citizens, one of the reasons the airwaves fill with negative ads. Education is also a long-term predictor of political engagement, especially just understanding how the system works and how ordinary people can move the needle. Mobilization by personal contacts or organizations can work for folks who sympathize with an organization such as a local environmental coalition, local civic group, or social media membership. There is power in mobilizing someone relationally, either as part of their personal brand or as part of their personal circles.”
Rebecca C. Harris, Ph.D. – Professor, Washington and Lee University

“To encourage people to vote, there are several things authorities can do: 1) Make election days national holidays so that people don’t have to choose between paying bills and civic engagement 2) Drop voter ID laws and follow the example of states like Massachusetts which make it easier to participate 3) Provide transportation to polling stations from high-density areas 4) Encourage more young people and minorities to run for office so that voters will feel their interests are being represented in political institutions.”
Daniel Aldrich – Professor & Director of the Security and Resilience Studies Program, Northeastern University