Members of the Carroll County Drug and Firearms Trafficking Task Force conducted a criminal investigation stemming from a reported drug trafficking complaint that culminated in two (2) arrests and with the service of multiple search and seizure warrants on 08/18/22. The investigation and related operations involved a collaboration between multiple law enforcement agencies, including the Pennsylvania State Police (PSP).

Detectives recovered approximately two (2) ounces of suspected crack cocaine, scales, packaging materials, currency, and other drug paraphernalia. With the assistance of the Carroll County Crisis Response Team and members of the Carroll County Sheriff’s Office and Westminster Police Department, Detectives served one (1) search warrant at a residence in Westminster and two (2) search warrants at residences in Taneytown. The PSP served a search warrant at a residence in Pennsylvania.

Desmond E. Gritten (35 YOA) and Gregory Hendricks (66 YOA) were arrested and charged as noted below.

Mr. Gritten is currently held at the Carroll County Detention Center on a No Bond status. 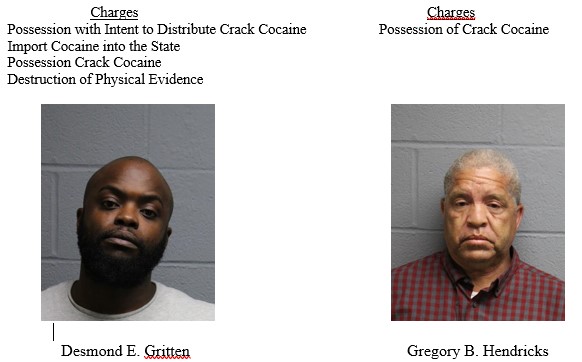