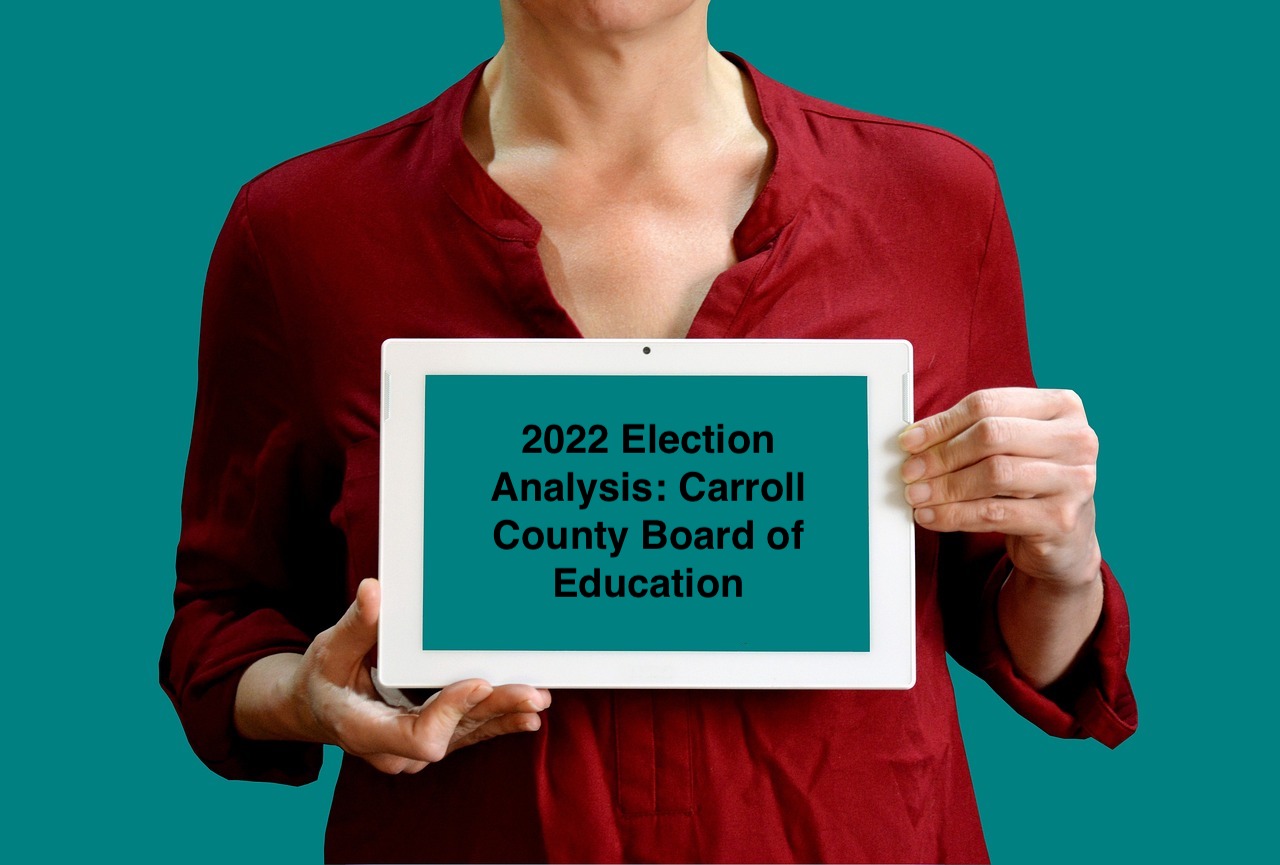 I know I recently said I am taking a break and pausing operations on The Observer until the end of the year (and I am sticking to that)…but I could not help but to review the final data points of the 2022 General Election for Carroll County Board of Education.

I downloaded and exported various data points that I thought were of interest and felt like this would be good information to share with the community (and to have a history of here on The Observer).

We know the final outcome and vote totals of the 2022 General Election for Board of Education (Battaglia, Whisler and Dorsey winning)…here are the final vote totals:

If you break out the votes by precincts and look at the candidate receiving the most votes in each of the 50 precincts:

Note: Dorsey and Scanlan tied in precinct 014-004 so they were both credited with receiving the most votes in that precinct.

At this point we all know there were two “TEAMS” running for Board of Education in 2022: Team BMW (Battaglia, Miller and Whisler) and Team PTA (Patricia, Tom and Amanda).

We also know that Republicans were (for the most part) supporting Team BMW while Democrats and the teachers union were supporting Team PTA. I know this is a “non-partisan” race but political support always seems to play a significant role in these local elections.

If you break out the votes by precincts and look at the TEAMS receiving the most votes in each of the 50 precincts:

So I decided to go a little bit deeper and look at votes by Commissioner District. Here are the vote totals for each candidate by District:

Looking at the total TEAM votes in District 1

Looking at the total TEAM votes in District 2

Looking at the total TEAM votes in District 3:

Another interesting fact about District 3: This was the only contested Commissioner race in the 2022 General Election: (R) Tom Gordon defeating (D) Zach Hands. Of note: Tom Gordon received the most votes in all 8 of the precincts in District 3 (just something to keep in mind as you look at the data above – especially the TEAM votes in the BOE race).

Looking at the TEAM votes in District 4:

Looking at the TEAM votes in District 5:

Team BWM won 3 of the 5 Commissioner Districts while Team PTA won 2 (from a combined vote total of the candidates on the teams).

A couple of thoughts about this data:

The three candidates not elected to the Board of Education in 2022 become instant front runners for the BOE race in 2024.

All three candidates that did not win in 2022 (Miller, Jozkowski and Scanlan) did well in total votes obtained in 2022. That will give all three significant name recognition going into 2024 (if they decide to run again). There will be 2 open seats on the Board in 2024 (as Marsha Herbert and Donna Sivigny are term limited and can not run again for BOE in 2024). I am sure a number of other names will come up over the next year or so leading into the 2024 election cycle.

Recently re-elected Ed Rothstein will be term limited in 2026 and can not seek reelection to the Carroll County Board of Commissioners. I am betting Democrats (and the teachers unions) will be targeting the seat in District 5 given the success of TEAM PTA in the 2022 election in that district. Local Republicans may need to pick a very strong candidate in 2026 to hold that seat for the party.

If interested in the raw data used in the analysis…you can find it here from the Carroll County Board of Elections:

If you see any errors in the data exported…feel free to reach out.