This is the first in a series of reports that I intend to send out between now and the end of the year about the recent election and the upcoming Maryland General Assembly session.

This report will focus on the recent election here in Maryland.

At this point, with most of the votes counted from last week’s election, it should be clear that in Maryland, the Trump brand leads to landslide losses. Trump got 36% of the vote in Maryland in 2016 and only 32% of the vote in 2020. Mr. Cox, who branded himself as “Trump endorsed”, won only 34% of the vote this year. In each case, the opposition won over 60% of the vote, which equates to a landslide victory. There may be other states in which the Trump name can guaranty victory, but here in Maryland, someone associated with Trump simply cannot win a statewide election. This fact alone doomed the Cox candidacy, but it was compounded by the sheer ineptitude of the Cox campaign.

The Cox campaign will go down in Maryland political annals as a textbook example of political malpractice. In the first place, Mr. Cox would never have won the Republican Primary if leftwing out-of-state money hadn’t poured into Maryland to urge Maryland Republicans to vote for Mr. Cox. The donors to this effort knew that if Mr. Cox were to become the GOP gubernatorial nominee, he would surely lose to whoever ended up winning the Democratic nomination. They figured that they could play Maryland Republicans like patsies. This ultra-cynical effort to install Mr. Cox as the 2022 Republican gubernatorial candidate succeeded.

But then, Mr. Cox added to the problem by running a disastrous campaign. Mr. Cox seemed convinced that if he refused to speak to the press and only appeared at friendly Republican political clubs, tens of thousands of heretofore-invisible Republicans would materialize to elect him. Of course, it didn’t happen, but the incredible thing is that all the way up until Election Night, Mr. Cox apparently was convinced that all those folks would materialize and vote for him. His campaign manager attended a Baltimore County Republican Women’s picnic late in the summer and announced that the Cox campaign had some sort of “secret sauce” that would ensure a big victory. Unfortunately, the “secret sauce” was little more than a wish and a prayer. Clearly Mr. Cox and the leaders of his campaign were living in some sort of a bubble, surrounded by adulatory supporters, cheered by movement Republicans and oblivious to the real world. I wonder if Mr. Cox ever ventured into Montgomery or Prince George’s or Howard Counties or Baltimore City where a majority of the State’s votes are cast.

Polls taken during the course of the campaign showed Mr. Cox losing badly to Mr. Moore. One wonders if Mr. Cox ever saw these polls because he never changed his campaign strategy. But ordinary Maryland Republicans saw the polls, and the polls depressed the Republican turnout because who wants to go out to vote when the person at the top of the ticket is doomed to lose overwhelmingly.

Kelly Schulz, whom Mr. Cox defeated in the Republican Primary, probably would also have lost in the General Election to Mr. Moore, but at least she would have run a professional race and would have drawn Republican voters to the polls. Instead, the depressed Republican turnout doomed Mr. Cox and also hurt down-ticket Republican candidates across the State. Hundreds of precincts which four years ago strongly voted for Larry Hogan went for Mr. Moore this year, in part due to poor GOP turnout.

Another factor played an important factor in Republican losses across Maryland this year. Former President Trump and his acolytes have been spreading the message that if a Republican votes by mail, a conspiratorial group of Democrats would make sure that such a vote is never counted. And so the word has gone out that Republicans should not vote by mail, rather should wait to vote until Election Day. Of course, this means that if a Republican voter is deterred from voting on Election Day, whether due to inclement weather or some last-minute emergency, the voter never gets to the polls at all. The net result is that by Election Night, there are a massive number of Democratic mail-in votes banked at the various County Election Boards, far more than the puny number of Republican mail-in votes.

My next report will focus on the Trump factor, then the future of the Maryland Republican Party and finally the upcoming session of the Maryland General Assembly. Stay tuned, if you are interested.

State Senator Chris West ran unopposed in the 2022 General Election after winning a contested Primary Election. Here are the results for each (as of November 17th):

An interactive version of the map is available here. 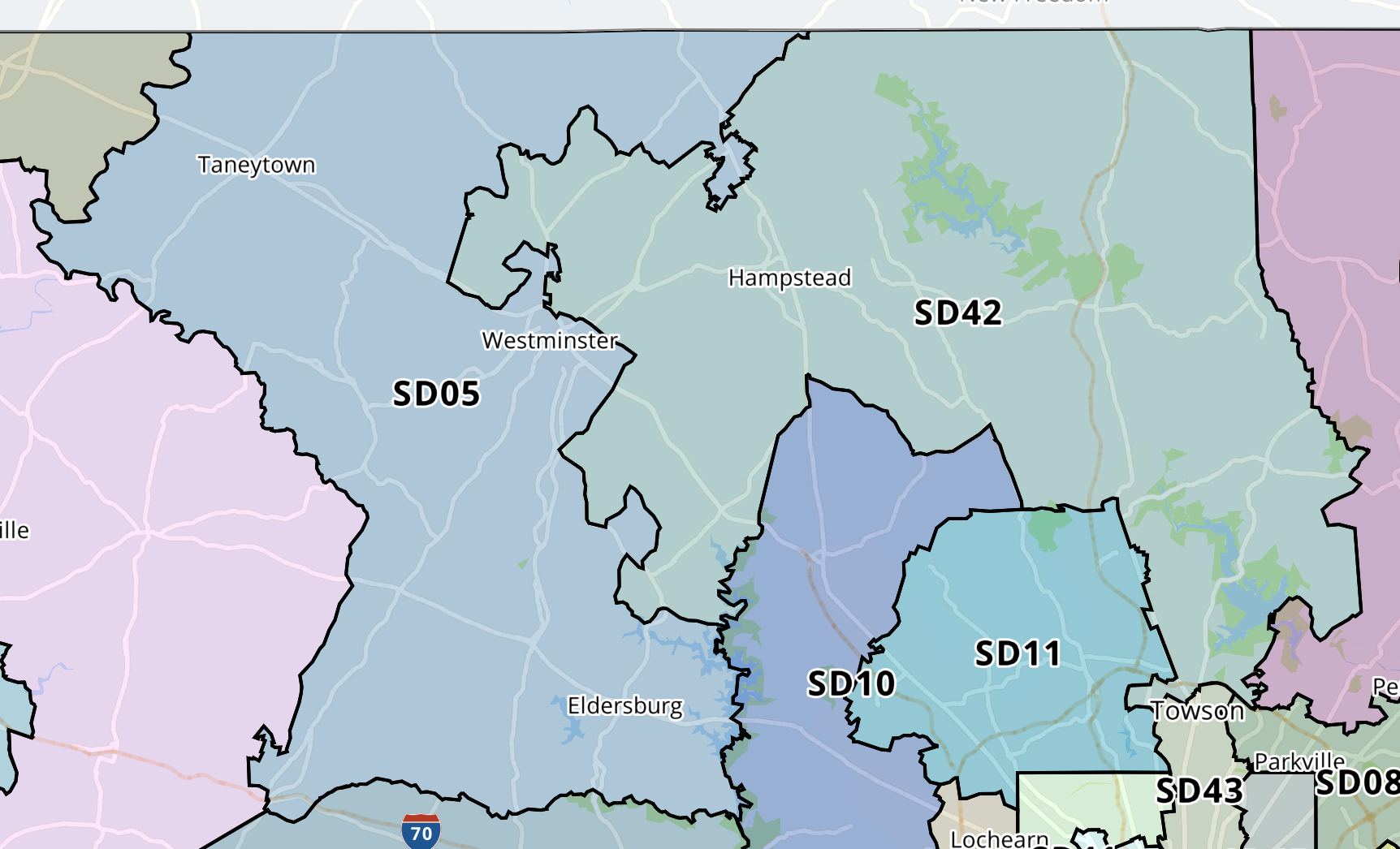