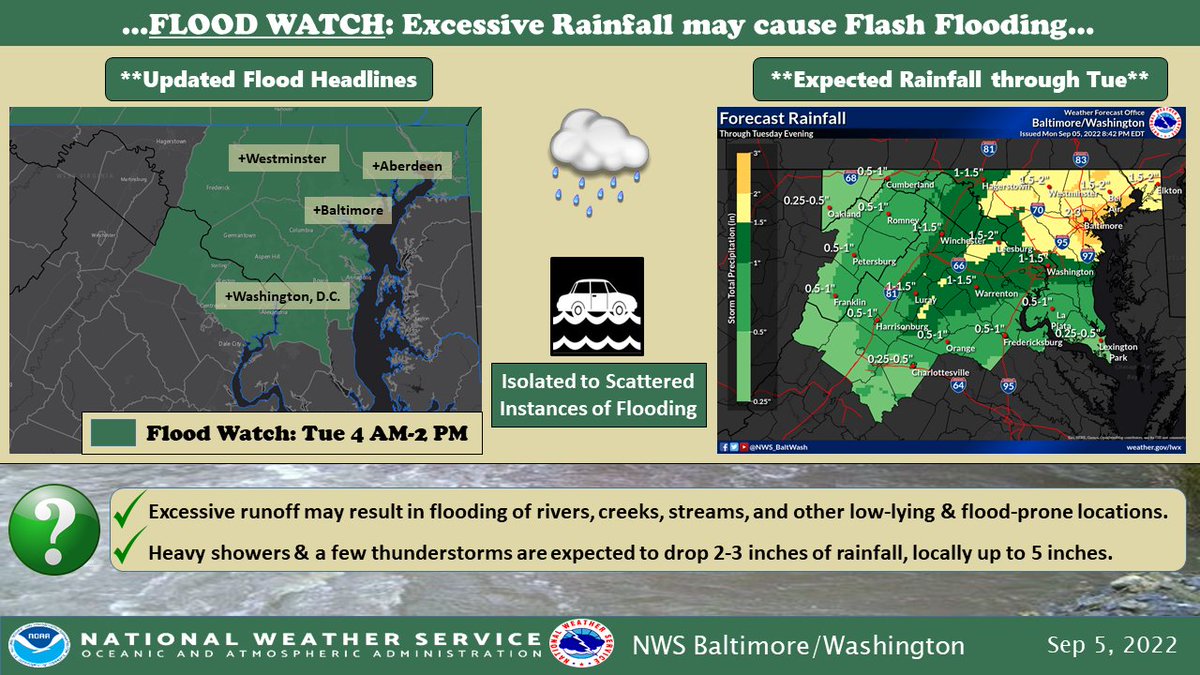 FLOOD WARNING IN EFFECT UNTIL 1130 AM EDT THIS MORNINGhttps://t.co/n3oO5vxYkb#CarrollCountyMD pic.twitter.com/dlBdYWlUZW

Not a great weather day for the first day of schools here in Carroll County. The county is expected to see a lot of rain fall today and we are under a flood watch until 2pm. Here are the details:

…FLOOD WATCH REMAINS IN EFFECT UNTIL 2 PM EDT THIS AFTERNOON…

* WHAT…Flash flooding caused by excessive rainfall continues to be possible.

* IMPACTS…Excessive runoff may result in flooding of rivers, creeks, streams, and other low-lying and flood-prone locations.

– An area of low pressure is expected to develop along a slow moving boundary draped across the region this morning through early afternoon. Heavy showers and embedded thunderstorms are expected to drop 1 to 3 inches across much of the watch area, with isolated higher amounts up to 4 inches possible in the
heaviest cells. – http://www.weather.gov/safety/flood

You should monitor later forecasts and be prepared to take action should Flash Flood Warnings be issued.

Weather forecast for today and tomorrow:

Tuesday: Showers and possibly a thunderstorm before 11am, then showers between 11am and 2pm, then showers likely and possibly a thunderstorm after 2pm. Some of the storms could produce heavy rain. High near 78. Light and variable wind becoming north 5 to 7 mph in the morning. Chance of precipitation is 90%. New rainfall amounts between three quarters and one inch possible.

Wednesday: A chance of showers. Mostly cloudy, with a high near 74. North wind 6 to 8 mph. Chance of precipitation is 40%.

Wednesday Night: A slight chance of showers before 2am. Mostly cloudy, with a low around 62. Northeast wind 3 to 6 mph. Chance of precipitation is 20%.

Recent social media posts from the National Weather Service account in our area:

An area of moderate to heavy rain will continue to move to the northeast through this morning. Instances of flooding remain possible, especially where the Flood Watch remains in effect. Should you encounter a flooded road, Turn Around, Don’t Drown! Latest: https://t.co/5RyZgpeTAT pic.twitter.com/yh900YEB35

The previous Flood Watch has been canceled. A new Flood Watch is in effect from 4 AM-2 PM Tuesday across the DC & Baltimore metros northward to the Mason-Dixon Line. 2-3" of rain are possible in this watch area, with isolated amounts up to 5". #MDwx #VAwx #DCwx pic.twitter.com/OfAhKifOhU