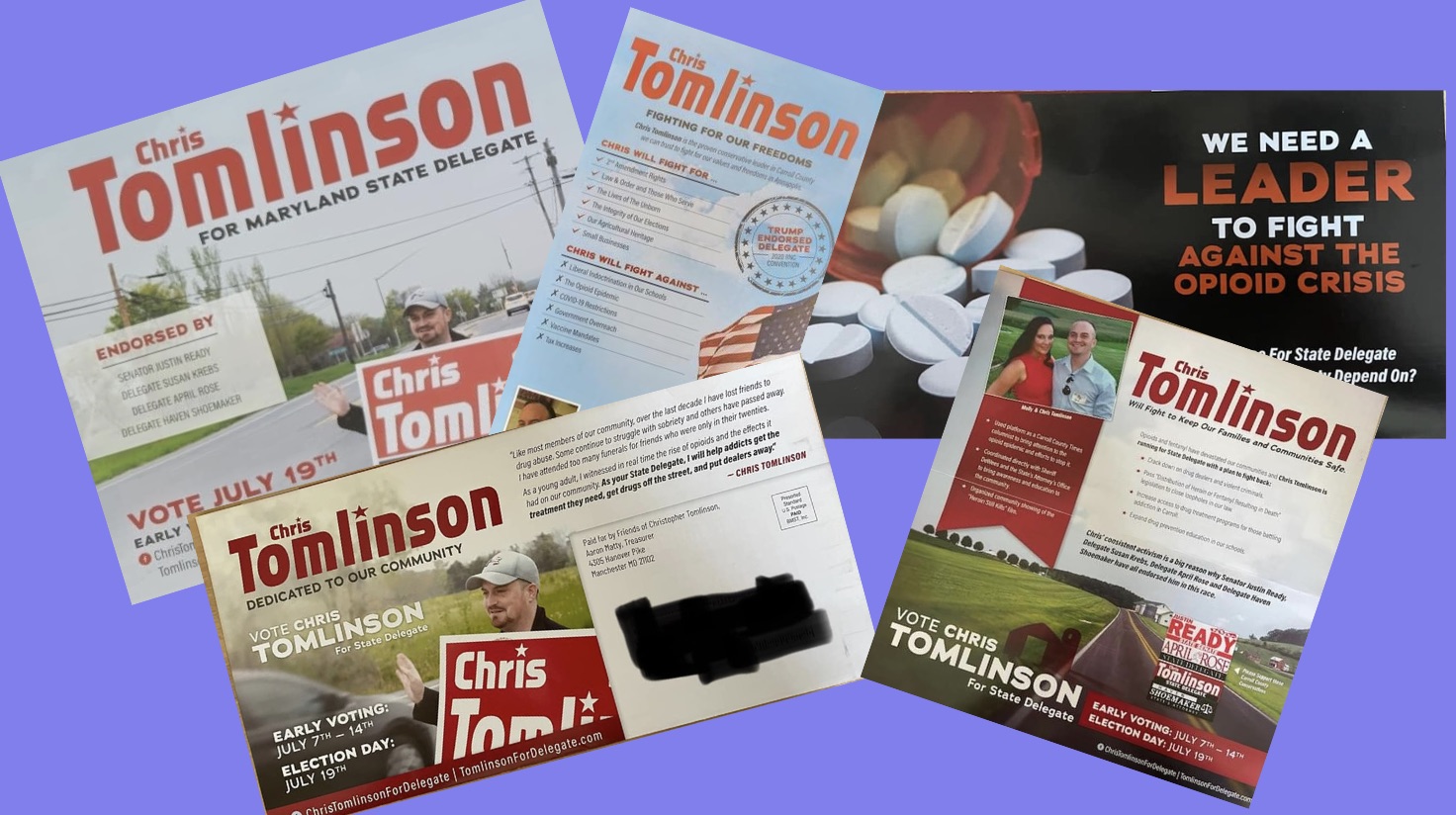 It is election season and some controversy is always expected…right? A candidate for State Delegate in District 5 (Chris Tomlinson) has come under fire for some of his campaign mailers from some of his opponents in that race.

Here are some of the recent public comments from other candidates about mailers from Tomlinson in the race for Delegate in District 5:

Just received a mailer from Chris Tomlinson who is running for Delegate. The mailer says “Trump endorsed Delegate”. What would someone think after reading that? It goes on to say 2020 RNC Convention. He was a delegate at the Republican National Convention in 2020. However, Trump had nothing to do with Chris Tomlinson being selected as a delegate. So…..where does the endorsement come in? He has not been endorsed by Trump in his run for MD House of Delegates, and again Trump had nothing to do with him being a delegate at the national convention. This is nothing more than a tactic to mislead voters. Mr Tomlinson, if I am wrong please let me know, I don’t want to mislead voters. I am not friends with Chris on Facebook so if you read this and you are please let him know.

Like Commissioner Frazier posted on his page four days ago, I received a campaign mailer from one of our opponents, Chris Tomlinson. Nothing personal against Chris, but I also take issue with the bold, yet vague claims on this mailer, and not just the one where he claims that he was a “Trump Endorsed Delegate to the 2020 RNC Convention” as bullet one of three on the back of the card. Personally, President Trump had no idea who Chris Tomlinson was. On the front of the card, “TRUMP ENDORSED DELEGATE” is stamped in larger bold font, while “2020 RNC CONVENTION” is stipulated below in intentionally deceiving fine print, leaving a first impression that Trump endorses Tomlinson for State Delegate, particularly for those of us with hyperopia (farsightedness). As for endorsements, “paying dues” by helping the current delegation get elected is not itself a qualification for elected office and could be perceived as a quid pro quo for “loyalty” paid forward. I am nobody’s preordained, anointed successor to the establishment.

I would go a few steps further than the Commissioner to dissect the misleading information by omission. The second claim on the back was that Chris was elected “3rd Vice Chairman of the Maryland Republican Party (2020-2022).” This was a position for which he ran unopposed. The third bullet stated that he was a “Carroll County Republican Central Committee Member (since 2017).” Although also true, Chris neglects to mention his position of Treasurer, a post that most would be proud to hold. Yet after some members questioned his treasurer reports, he abruptly quit, and the Central Committee was ultimately fined $2K. A photo displays an ever-industrious Chris Tomlinson, waving a sign with a prominent barn and pasture on it, appealing to the farmers and agricultural heritage of the county, without any significant education or experience in that realm.

Concerning the front of the mailer, I agree with everything “CHRIS WILL FIGHT FOR” and “CHRIS WILL FIGHT AGAINST.” Not everything is a fight, and in his defense against RINOs, not everything is a reach-across-the-aisle opportunity either. For those issues where you take a hard moral and voting stance, and in Chris Tomlinson’s case, namely agriculture, small businesses, the opioid epidemic, COVID-19 restrictions, and vaccine mandates, you’d best come armed for the fight, with education, experience, and wit, to lock horns with the subject matter experts of the opposition without getting thrown. Unfortunately, there is no subject matter expertise or hard evidence for a track record for any of his stances, just vague, bulletized talking points that should be standard for any real Republican. As Chris wrote in his Carroll County Times Letter to the Editor today, he was “fighting” (mentioned eight times directly or by synonym) as a columnist from 2017-2021. It can be inferred by reasonably prudent people that he was fighting for public office as well.

Meanwhile, from 2002-2022, I was on active-duty as a scientist and veterinarian in the Army fighting for our country, working on medical solutions to counter the most dangerous pathogens and compounds on the planet (including opioids, Ebola, COVID-19), in the lab, in the Capital, and in Iraq. I was fighting since 2016 to establish my own animal hospital business, saving animal lives and maintaining competitive wages for my staff while not paying myself for the first three years and then weathering COVID-19. I had my own fight with a COVID-19 vaccine adverse reaction from the Inovio Phase II clinical trial and J&J that resulted in a complete shoulder replacement. I fought against the extinction of threatened species through research, rescue, and rehabilitation of marine mammals, sea turtles, raptors, and amphibians. I know that my fights were tangible, substantive, and impactful beyond just words.

Like Dennis Frazier, Stephen Wantz, Eric Bouchat, and Scott Jendrek, I am a father. We all know what it means to put children ahead of ourselves and the minute-by-minute worries we have over their lives and futures. On March 4, 2005, I witnessed the monumental grief of a mother who learned from my notification that her son would not return from Iraq, and I cope with that every day. I know the anguish of leaving my own small children, including 21-month-old Matthew, to volunteer for Iraq on their behalf and not spend Father’s Day with them in 2007. I fight for them to this day.

Knowledge is power. Be an informed voter, and “Stay thirsty, my friends!” 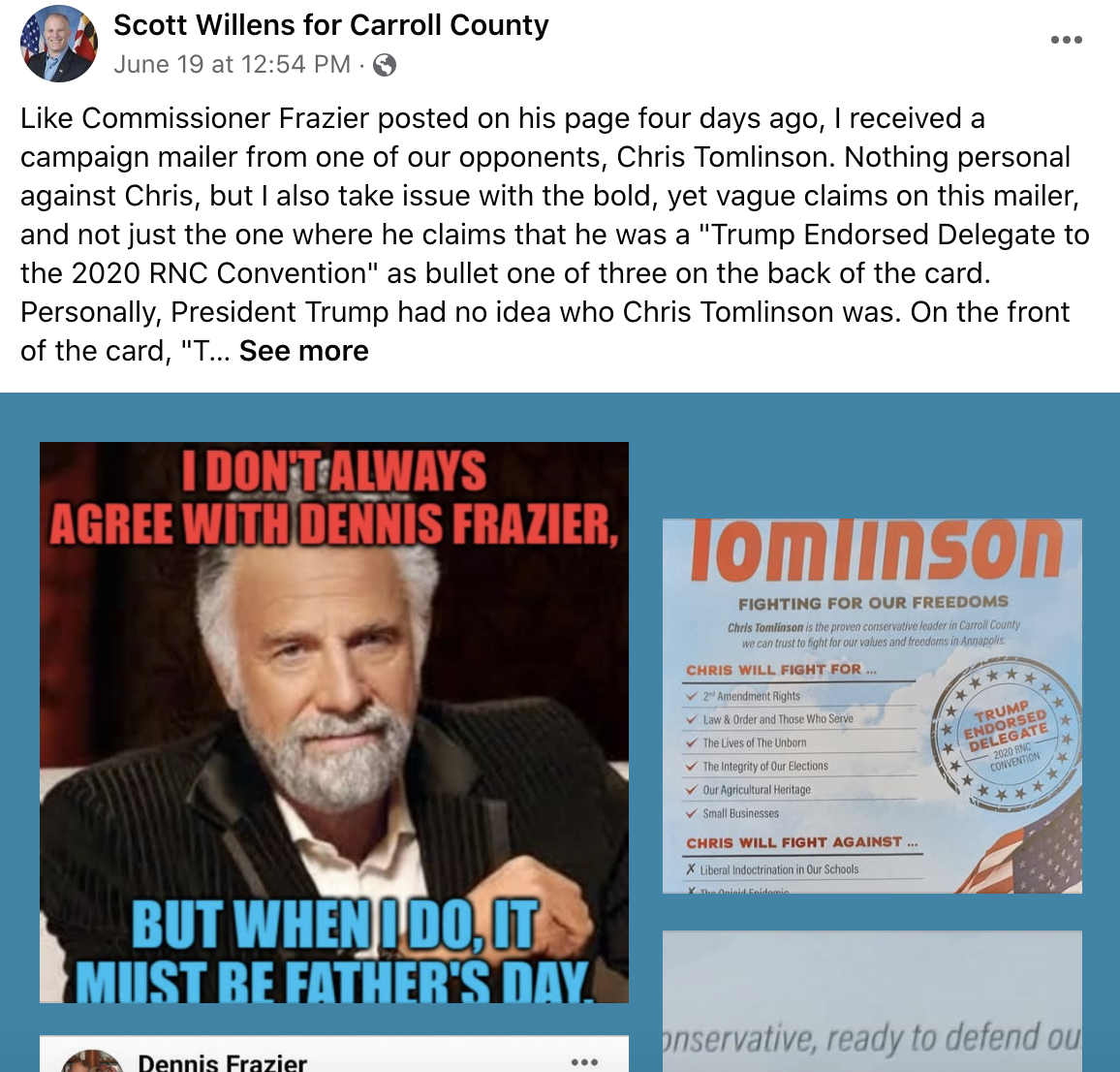 And…Scott Willens posted another comment yesterday about the mailers:

Ok, enough is enough! This misinformation campaign must stop now. More mailers from my opponent, Chris Tomlinson, this time concerning opioids, with vague claims of having “coordinated directly with Sheriff Jim DeWees and the State’s Attorney’s Office to bring awareness and education to the community.” What awareness? What education? What efforts as a columnist made a difference? Organizing a single showing of the “Heroin Still Kills” film? Surely not working for decades on medical chemical defense in uniform, including combatting the opioid crisis as a PhD pharmacologist at USAMRICD. Working on the campaigns of other politicians is not “consistent activism” with any enduring impact. What are the metrics for these alleged successes on behalf of the people of Carroll County and Maryland? Again, Chris touts all great conservative stances that any self-respecting Republicans can get behind, but where’s the beef?

Many of us have lost people we care about to drugs and alcohol, also not a qualification. I lost a veterinary friend and colleague to ketamine overdose while in Iraq with him, as well as two friends to cirrhosis in the past two months. Not my credential either. Who can “lead the fight against the opioid crisis” in Carroll County and Maryland? Someone who not only knows what damage drugs inflict at the cellular, organ, and body level, but someone who doesn’t possess not one, but TWO DUIs in their driving record! An Army leader who held substantive leadership positions of Chief of Operations and Plans (S3), Director of Research Programs, Deputy Director, and Deputy Commander. It is honorable and noble to reinvent yourself in a new positive image, but it’s another to disingenuously sequester a tainted past from the public eye to get elected, particularly when speaking on the prevailing topic of the opioid epidemic.

It’s better that this dirty laundry get aired now, before July 19th. Frankly, with all the Carroll County Republicans who have known about this for years, I’m extremely disheartened that very few have spoken out earlier and often, save a concerned parent at the 2015 Manchester Mayoral Election forum (https://youtu.be/j4gyGad61IE). It shouldn’t take a newcomer to shine the light on Chris Tomlinson’s troubling criminal driving record that mixes like oil and water with elected office and the topic of substance abuse. There are no Democrats running in the primary, but there is nothing to stop them from establishing a write-in campaign against a severely damaged Republican candidate in the general election…and winning. Stop this nonsense now, and vote for those of us who can pass a background check for a security clearance…and have held one.

The astute Maryland Muckraker may have fallen just short of providing the direct links to evidence implied in their article from June 5th, but I will not (https://www.newsandtimes.com/…/the-rot-at-the-heart-of…/). If bringing these issues to the forefront, even if standing firm on my own, knocks me out of the election or alienates me from the establishment, so be it, but the woefully unqualified Chris Tomlinson cannot represent us in Annapolis, period. The Army defines integrity as “doing what is right, all the time, within the bounds of your personal beliefs and without compromising common laws.” There are some Veterans backing Chris and his skeletons who should know better. Knowledge is power. Be an informed voter. 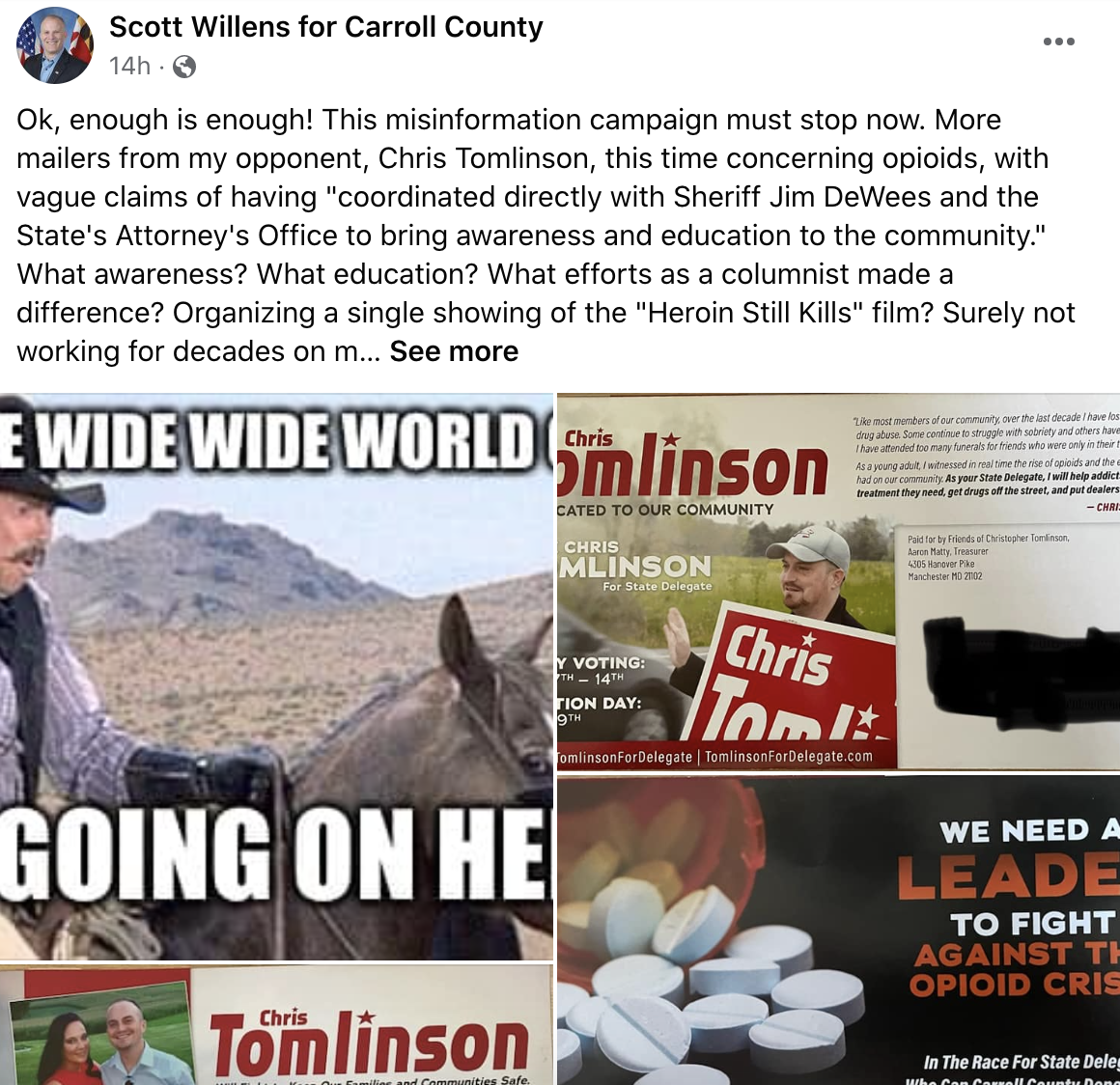 A significant plus for Chris Tomlinson this election cycle is that he is backed by the current State Senator in District 5 (Justin Ready) and the one candidate running for reelection in District 5 (April Rose):

There are 8 candidates running for 3 seats for Delegate in District 5 in 2022. Learn a little more about them all here: