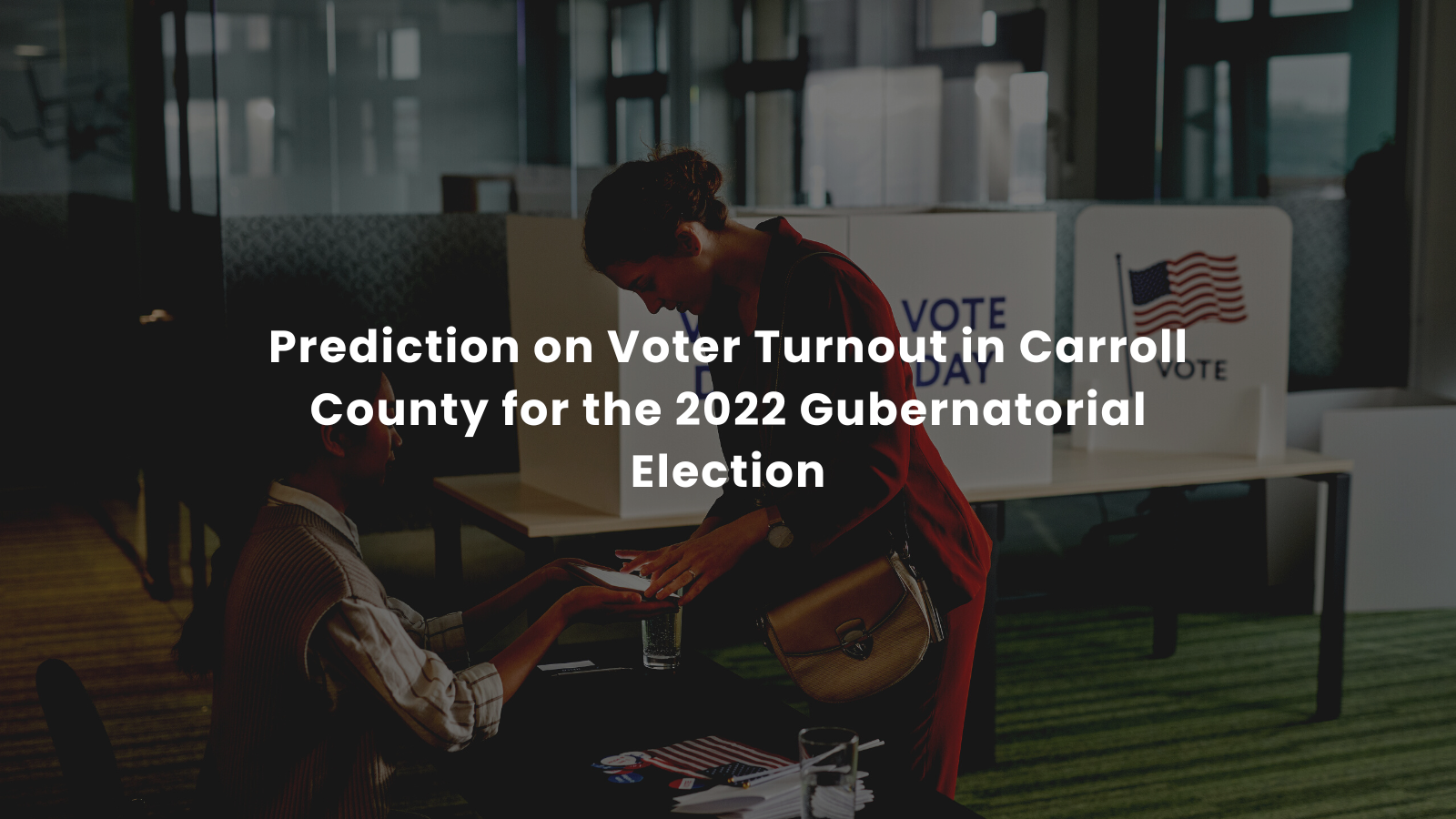 Predicting voter turnout is never easy but I thought I would give it a go on the day before Election Day in Maryland for the 2022 Gubernatorial General Election.

I think to make a prediction it would be good to look back at turnout in past Gubernatorial General Elections. Here are turnout numbers for the past 3:

Carroll County cast 61,416 votes (making up 58.38% of eligible voters). In looking at the 10 largest jurisdictions: Carroll County ranked as the 2nd highest voter turnout % only behind Harford County (60.97%).

2022: Where are we at the day before Election Day:

Early voting is over and a lot of mail in ballots have been returned. Here is where Carroll County stands in voter turnout before Election day:

Note: The data on November 7th came out just before 9:00am. The mail in ballot totals in Carroll County (and a few other jurisdictions) did not change but there were some changes to the overall voter turnout numbers which was corrected in the paragraph above.

All of the data above is available here: https://www.elections.maryland.gov/press_room/index.html

Here are some issues that could play a factor in voter turnout in 2022:

Most of the local races in Carroll County were decided in the Primary. Most of the Commissioners, all of the State Senators, State Delegates, Sheriff, State’s Attorney and others have already been decided in the county. There are two LOCAL contested races of interest in the 2022 General Election:

Will the lack of local races keep some people home on election day? Maybe.

Most news agencies are talking about a potential Red Wave (GOP candidates getting elected) across the country. Republican turnout is expected to be high in many places.

Here in Carroll County 49.93% of residents are registered as Republican (per the Active Voter list on October 22nd).

3. Split in the Republican Party in Maryland

If you watched the 2022 Primary in Maryland you saw a real split in the Republican Party as that party had to choose between Dan Cox and Kelly Schulz in the race for Governor. As we all know Dan Cox came out on top in the Primary.

The question is: Will Republicans that backed Kelly Schulz come out and vote in the 2022 General Election or might they skip this election? I believe this may be an interesting factor in voter turnout in 2022…especially here in Carroll County (where Cox beat out Schulz 49.51% to 47.31% in the Primary).

4. Polling has Moore significantly ahead of Cox in the race for Governor

The top of ballot race (this year it is Governor) usually has a great deal to do with voter turnout. If you have seen the polling in the race it is a pretty significant advantage for Moore over Cox (20+ to 30+ point margin for Moore).

Will voters be motivated to get out and vote given that most polling has this race as a runaway before Election Day? This honestly could go either way…keep people home or even better motivate voters to vote. Hard to say at this point.

If you look at the weather forecast for tomorrow we look to be in for a cold day. Per the National Weather Service during the day (Sunny, with a high near 56. North wind 8 to 11 mph, with gusts as high as 20 mph) and in the evening (Mostly clear, with a low around 33. Northeast wind 3 to 5 mph)

So a cold day to get out and vote and a cold day for workers at the various voting locations. Might this keep voters home on election day? Maybe.

Taking the past turnout numbers and factoring in my list of items of interest above…here is my prediction for turnout % in Carroll County in 2022.

If I were Vegas and creating an Over/Under number I would put Carroll County projected turnout at around 58% or around 74,000 votes cast in 2022

I think the factors noted above might be enough to bring down voter turnout a bit from the 2018 election. I do firmly believe that voter turnout % in the county will be higher that the statewide average (as is generally the case) but maybe not as high as some past elections.

I hope I am wrong. I hope readers of this article see that number and get out to vote to prove me wrong and that Carroll County hits 65% or greater in 2022. That would be fantastic.

Tomorrow is the BIG DAY. The Observer will be stopping by a few voting locations before lunch to visit with candidates and supporters. Be sure to follow The Observer on Facebook for the latest updates: https://www.facebook.com/CarrollObserver

The Observer will publish voting data on Wednesday morning (November 9th) knowing that the races will not be over until Mail In and Provisional ballots are counted after Election Day:

A final election wrap up article will be published when all the votes are counted (after November 18th).